MarciaJ
Frequent Participant
Need the ability to delete an account in addition to the deactivate/reactivate feature.

DailyBibleOnline
Member
Great new feature; but also need to be able to delete account as well as deactivate.

Jeff_G
Employee
Status changed to: New
There isn't a way to delete a user completely from your user accounts. You can deactivate accounts that you no longer want to have access to the account. If you would like to have the ability to delete them completely, please vote for this idea.

GoddardCollege
Participant
With only being able to deactivate users, it gets crowded with too many inactive users, such as former employees. I would like to be able to remove a user when they are no longer employed with us. Thanks.

mmcatee
Occasional Participant
Why is it not possible to delete users? ConstantContact support says even they can't delete a user from an account. Over time we have accumulated a long list of users we have deactivated because we couldn't remove them. I really want them deleted. My user list is now long enough that it's very hard to tell who is an active user and who isn't. I'd really like to clean up this list by removing users we no longer have.

Kate_F
Regular Participant
Greetings. I admit that I must not be as perfect as your developers as I have inadvertently created account users that will not work within the parameters you provide. I would love to delete them to clean up the list as it does not display in alphabetical order or even in order of active/inactive. Is there a reason why the delete function is not permitted? The users have no activity tied to them. Only one of the account users has logged on - as a test. (By the way, what is the secret to how the list of account users is ordered?) As a school that has grades preschool through 12th grade, I was attempting to create a grade level account user that the room parents could use for sending out emails. The limit of 9 additional account users (unknown to me at the time) ended that project with 5 of the grade level account users created. My goal is to eliminate (delete) the account users created in error to clean up the list and make it obvious which account users are valid. Is that something that can be done behind the scenes on my behalf? By the way, the feedback screen cuts off the text on the button that I assume I must click to post this feedback. Perhaps the parameters for this pop up should be expanded. Thanks. Peggy

PMI_Central_Mass
Participant
we have multiple aliases and some are out of date. I need to delete emails from verified list. Not simple to navigate to this.

SAGT
Occasional Participant
What is the limit of number of users? Why can't I delete old users who are no longer with the organization?

MiramontCC
Participant
I would love the ability to fully DELETE a user.

DeborahS8884
Participant
I want to completely delete old users from the list. Not edit them with fake info. More than "deactivate".

AZHIMSS
Participant
As a non-profit organization, we have users turning over all the time. We need to be able to clean up our user list by deleting those users who have left the organization. Its a real mess trying to view our user list when we have so many old ones.
1 Vote

KristyD07
Regular Participant
It would be extremely helpful to be able to permanently delete users!!! All these old users simply clutter up my system and make it difficult to wade through and pick out the active users. 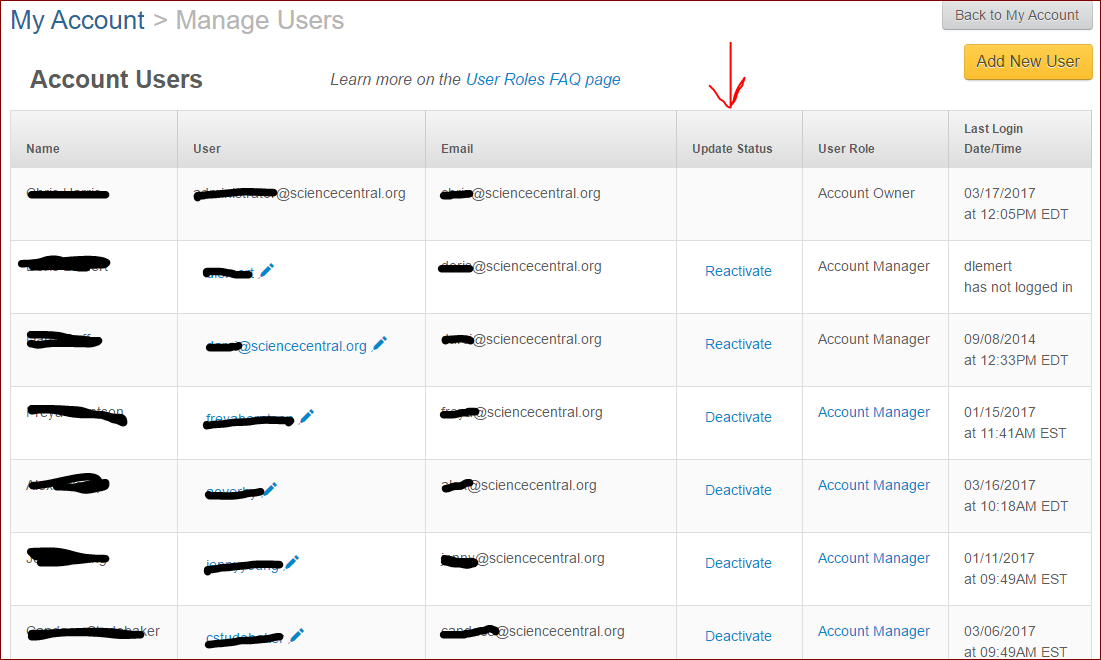 LaGuardiaHSPA
Member
This question has been asked for years and years now. When people depart our organization, why can't we delete their account in full instead of just deactivating it? It creates such a mess. What is the difficulty? At least allow the deactivated users to display on a different page, or put them all at the bottom of the list. Something. Anything.

Thank you for the feedback @LaGuardiaHSPA,

I can see how being unable to delete inactive users can cause it to be cluttered.  Unfortunately right now we don't have that ability to delete them.  This is great feedback, though, and I'm going to open your idea up for voting.  Thanks again!

StuartJ14
Participant
Hi - As of now you can deactivate account users but you can't delete them. You can imagine over time with employees vacating this becomes a long list of inactive users - it would be great to add the ability to delete users from the system.

BeckyA90
Participant
There needs to be an easy way to delete and add people who can use Constant Contact. Why can't I just delete someone who no longer needs to use it?

KarenRP
Occasional Participant
Would really like the capability, as the owner, to delete users that are no longer needed and will never be reactivated.

LeahN
Participant
I would like to delete some users out of the list but it does not give me the option to do so,