5 Tips on the Rollercoaster Ride of Yelp Reviews

5 Tips on the Rollercoaster Ride of Yelp Reviews 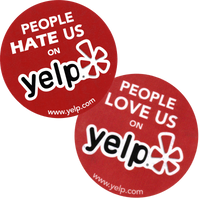 Local businesses all over have a love hate relationship with public review site Yelp.  And if they don’t, it’s probably because they haven’t received enough reviews to see both sides of the coin.

At the center of most of the issues businesses have with Yelp is the virtual anonymity of the reviewers.  A case being considered by the Virginia Supreme Court takes issue with this: in July 2012, Hadeed (the business owner) sued the seven reviewers for defamation, and demanded that Yelp turn over their true identities.

First, let’s talk about the 4 perspectives that Yelp is attempting to balance with reviews, reviewers, and businesses, then we’ll end with 5 tips to consider.

Local businesses get more customers when they have positive reviews – measurably more business.  However, businesses have two motivations that can be in conflict with one another when it comes to anonymity of the reviewer:

To summarize – anonymity can be a bonus in getting lots of good reviews but becomes a problem when the reviews are negative – a case of ‘you can’t have your cake and eat it too’.

Customers are happy to give reviews if everything went well for them and it’s easy to post the review – that’s why so many reviews are 5 stars.  However, when things don’t go well, the situation gets messy.

Essentially, Yelp’s success relies on high quality positive and negative reviews.  Unfortunately, the scenarios described above make it clear that there’s potentially a lot more going on than just straightforward positive and negative reviews – all kinds of complexity, assumptions, fears, and unknown motivations.   This is, of course, true of all human activities, but we’re fooled by Yelp’s simple interface of stars and comments into thinking it’s just about transparency.

Yelp is, I believe, here to stay – or something similar to it since Google and Facebook are trying to incorporate reviews as well.  I don’t think the Virginia case is going to have a sweeping effect – and it probably shouldn’t given the problems with having reviews require positive personal identification (the retribution problem, not the technical problem).

So what is a business to do…

Read more on my blog at www.SocialMarketingDiva.com

Register for our "Making Sense of Online Marketing for Retail" Webinar

Join us on Thursday, August 13th at 2pm ET for a free webinar where we'll discuss how to incorporate online marketing into your retail store.