Learning from Weeds:  5 Strategies for Business and Life

Learning from Weeds:  5 Strategies for Business and Life

It's that time of year again, when weeds start popping up all over our yards.  While they're mostly seen as nuisances, it turns out weeds have a lot to offer anyone pondering strategy for their business or life.  Think about it.  Weeds never get discouraged, lonely or depressed.  Their mission is to dominate space; they're masters at probing new opportunities and defeating competitors.  They are so relentless and perfectly suited to thriving in difficult conditions, we would all do well to adopt their methods. 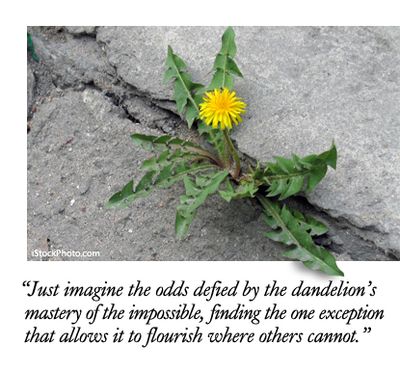 So I sat down with Ciscoe Morris, television gardening personality and author of the best-selling book, Ask Ciscoe, to get an expert's perspective on the lessons we can learn from weeds.  Fortunately, he was also kind enough to share a few tips for defeating the five specimens featured below.

1.  Blackberries - Thorniness and Aggressive Expansion:  In the Pacific Northwest where I live, blackberries are one of the toughest weeds to deal with.  In no time, they will fill acres of land, towering as high as twenty feet.  And once they've taken root, they make the space they occupy impossible to penetrate.  Wouldn't it be nice to hear your competitors describe your market position the same way?  Blackberries use two formidable weapons to achieve their dominance:  thorns and fast-growing vines.  In business, it certainly helps to be thorny when confronted by competitors and transgressors.  Gaining the reputation for vigorously defending your property makes it less likely others will mess with you.  Meanwhile, the plant's relentlessly exploratory vines are its secret to finding new volumes to fill, which is exactly what we should be doing with our businesses -- always watching for new opportunities to expand market share and dominance.  Ciscoe's Tip:  If you want to get rid of blackberry vines in your own back yard, Ciscoe advises removing the plant material down to the soil and continuing to keep them mowed every two weeks.  "After about two years of that," he explains, "they won't come back."

2.  Dandelions - The Perfect Small Business Strategy:  I think dandelions are truly inspirational.  Driving the vast freeways of Los Angeles around this time of the year, you'll see countless examples of this hardy specimen sprouting from cracks between giant slabs of concrete.  Just imagine the odds defied by the dandelion's mastery of the impossible, finding the one exception that allows it to flourish where others cannot.  Of course, dandelions are more commonly found in broad open spaces, perhaps like your own lawn.  And there, they employ an ingenious strategy for dominating space, by deploying their radial fan of broad leaves that lay flat on the ground, killing off whatever happens to surround their position.  They find a way to dominate their own small patch of ground, much like a small business or start-up should do in its marketplace.  Starting a business requires robust survival skills, but it really depends on a strategy of quickly carving out a niche in a much larger market and dominating that single patch of ground aggressively.  Ciscoe's Tip:  If your lawn is plagued by dandelions, Ciscoe advises pouring a mixture of water and white vinegar over the plants.  "The vinegar kills the plant all the way down through the root, which is the only way you'll truly get rid of these."

3.  Shotweed - The Importance of Having a Survival Strategy:  Weeds teach us all sorts of lessons about survival.  And the shotweed is a master of deception and survival.  Right about now, they might be showing up in your garden, looking sweetly demure, with their innocent little rosettes of delicate leaves and abundant white flowers.  But don't be fooled by this ruse, because they're about to spring their devious trap, leaving your garden forever bearing the effects of what comes next.  The shotweed has a fascinating strategy that goes like this:  the slightest touch by you, a pet or a passing breeze pops the cork on their spring-loaded seed pods, dispersing them all over the surrounding area.  So every time you pluck one plant, hundreds more pop up the following year.  Does your business have a similar survival strategy?  It should.  Simply by growing and diversifying your client base, you can ensure that no single problem with a particular client or market can take you down.  Ciscoe's Tip:  If you have this or any similar type of weed, the secret is to pull them during the Fall, when they're not yet ready to spring their seed traps.  "Weeds need four things to grow; soil, moisture, warmth and direct sunlight," he explains.  "So another way to control this or most other weeds is to lay down a thick layer of mulch.  Without sunlight, they can't germinate."

4.  Morning Glories - Borrowing Infrastructure to Accelerate Growth:  These flowering, twisting vines are a study in the use of borrowed infrastructure to thrive.  While they exhibit tremendous tensile strength, morning glories never develop the woody structures necessary to reach sunlight at treetop heights.  But they don't need to, thanks to their strategy of climbing atop any nearby tree or shrub.  Once they reach the top, they spread out across the crown of their hapless neighbor, stealing its access to sunlight and moisture.  In business, we find many examples of smaller businesses teaming with much larger ones, although these are far more symbiotic relationships than what the morning glory provides.  This is an excellent way for the smaller business to gain critical access to vast new sales channels to foster growth, while the larger business gets the specialized expertise the smaller company can inject into its offerings.  I use this strategy a lot, resulting in strategic partnerships with, for example, large e-mail platforms for our CartoonLInk e-mail marketing program.  It is a strategy that can foster explosive growth and it's something you should be employing in your own business.  Ciscoe's Tip:  "This is one of those weeds that is almost impossible to eliminate," he says, "but you can always weaken the plant by diligently yanking any signs of it showing up in your garden."

5.  Comfrey - The Importance of Enforcing an Iron-Clad Contract:  While not technically considered a weed, once this specimen takes root, it has no intention of going away.  Ever.  To its credit, Comfrey is considered an herb of considerable value in the healing of skin and other maladies.  Ciscoe explains, "The plant is sterile, so it doesn't go to seed to reproduce."  Instead, it generates new plants from any loose fragments of its root system.  Pulling it only leaves more plants behind.  Roto-tilling its former territory makes it even worse.  I think this brilliantly illustrates the value of keeping a contract strictly enforced throughout the term of the agreement.  It's said contracts are only as good as the people signing them, which is certainly true.  But regardless of who's signing, contracts need to be utterly enforceable and diligently enforced, or they're utterly useless.  Ciscoe's Tip:  If you ever decide to plant this species in your garden, keep it carefully contained so it doesn't have a chance to spread.  And if you decide to remove it later, plan on treating the soil with boiling water or even a torch.  "But be careful,'" offers Ciscoe, "you could end up setting everything else in your garden on fire!"

It's not desirable to look or smell like weed, but if someone describes your company's growth as weed-like, take it as a complement.  In fact, it's the highest compliment your competitors could ever offer.  But enough about business -- it's time to get out in your own garden and reign in those weeds.  If you'd like more of Ciscoe Morris's advice, pick up a copy of Ask Ciscoe before it's too late.

Would you like to double your e-mail campaign open rates immediately?  Put my "cartoon device" to the test in your next e-mail campaign for free and get a free e-book excerpted from my book, Drawing Attention.

Stu Heinecke is a DMA Hall of Fame-nominated marketer, one of The Wall Street Journal cartoonists, author of Drawing Attention and Big Fat Beautiful Head, and President of CartoonLink, a marketing service dedicated to bringing an unfair advantage to marketers through the magic of cartoons.  Would you like to double your e-mail campaign open rates immediately?  Put CartoonLink's "cartoon device" to the test in your campaign for free and get a free e-book excerpted from my book, Drawing Attention.

Stu Heinecke
Host of Contact Marketing Radio
Founder & President of "Contact" and CartoonLink, Inc.
Wall Street Journal cartoonist
Author of How to Get a Meeting with Anyone
Labels:
Tags (9)
0 Votes