Neil Armstrong Taught Us So Much About Never Giving Up

Neil Armstrong Taught Us So Much About Never Giving Up

Everyone knows Neil Armstrong was the first human to step foot on the moon, the first person to step on any celestial body other than Earth.  To get there, Armstrong proved his mettle over and over again, as a fighter pilot in the Korean War, as an X-15 test pilot, even on his way down to the surface of the moon on that historic flight.  When he and Aldrin landed, they had no more than ten seconds worth of fuel left in the lunar lander's gas tank.

But here's a story most of us have never heard about Neil. 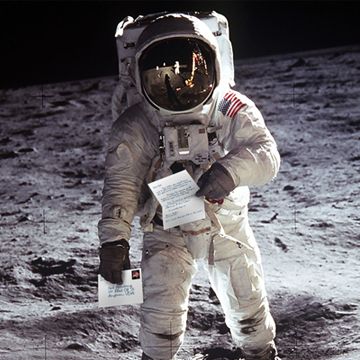 Although he wasn't afraid to put his life on the line in his work, Armstrong was famously shy when it came to public speaking.  After landing on the moon, his social anxiety intensified so much he became a recluse.

But that didn't stop famed real estate speaker and coach Brian Buffini from reaching out, to ask Armstrong to make the keynote address at an upcoming event.  So Buffini sent a note.  Nothing happened, so he sent another.  And another.

Eventually, Neil wrote back, "Are you going to continue sending me these notes?"  Buffini wrote across the top, "Yup," and send it back.  With that, Neil Armstrong, the first man on the moon, world icon and one of the most difficult-to-reach people on the planet agreed to make the speech.  It was one of the very few public addresses he ever made after returning to Earth that one last time.

Is there someone you're trying to reach, someone who could make all the difference in your own business?  Don't be afraid to reach out.  And don't forget Neil Armstrong's final, if perhaps somewhat unintended legacy.  Never, ever give up.

Stu Heinecke
Host of Contact Marketing Radio
Founder & President of "Contact" and CartoonLink, Inc.
Wall Street Journal cartoonist
Author of How to Get a Meeting with Anyone
Labels:
Tags (12)
2 Votes
4 REPLIES 4
Highlighted

stu,  Thanks for the most interesting article about our famous fist nan on the moon! Who knew?

Great article! I was a client of Brian Buffini's for several years but started after Neil Armstrong spoke at the MasterMind event. Brian's methods of working by referral changed the quality of my real estate business. Reaching out in various ways - calls, notes or pop-bys kept my business alive during the 2008 real estate slump & allowed me to build an excellent client base.

This was an interesting story of respectful persistance & the power of a personal note.

As always a well written article with an interesting and timely subject matter.Thank you for another article that was a pleasure to read Mr Heinecke . I had the priviledge of hanging out with Mr Armstrong on several occasions since my dad worked for NASA. I would hang on every word.

My father-in-law knew Mr Armstrong and loved him a lot! He had several stories about him.