A good friend of mine recently confided that she was excited about an executive sales job she was interviewing for, but the prospect of cold calling on CEOs was causing her a great deal of worry.   I had just the opposite reaction.  “I love cold calling on CEOs,” I explained, “but I have a secret weapon that always works and makes it a lot of fun.” 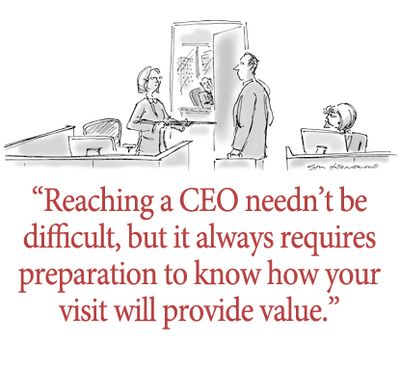 And I do.  I have this device that never fails to get me through to virtually anyone.  I’ve used it to reach Presidents, Prime Ministers, celebrities and lots of CEOs and top decision-makers.  Because I have the power to reach anyone I choose, I am able to set and achieve much higher goals for my company.

Selling is, in so many ways, easier at the top and more profitable, too.  Selling to VITO author Tony Parinello cites bigger sales, shorter cycles and greater frequency of transactions as just a few of the compelling reasons why it only makes sense to direct your selling efforts to Very Important Top Officers.  Author David Peoples echos the sentiment in his book, Selling to the Top.  Both agree that selling to the bottom levels may feel safer and more comfortable, but it is an utter waste of time.  The problem is, reaching CEOs and other highly important people is exceedingly difficult to do.

What follows are seven very successful techniques for breaking through to the executive suite.  In the interest of balance, I am including some of my own techniques as well as others that I admire.  They all work and they range in cost from $0 to $10,000 per contact.

1.  Personalized Cartoon on a Giant Foam Core Postcard.  Okay, I confess partiality.  This is one of my ideas.  But it works amazingly well.  Here’s the idea:  I create a cartoon about the recipient (I am a long-time published cartoonist with work in The Wall Street Journal and countless ad campaigns, so I’m well qualified) -- and I have a two by three foot postcard produced on quarter-inch foam core by a sign shop local to the end destination.  The message on the back is usually brief, telling the target contact what I want to discuss and to expect my call.  I have the piece delivered by courier and when I call to follow up, I always find that it has created a stir.  In one case, I sent it to the president of a franchise network where the deal to become an authorized vendor had stalled.  He liked the giant postcard so much he carried it under his arm all morning, showing it around the office.  Needless to say, we got the deal done.  What’s wonderful about these contact campaign pieces is that people hold onto them as prized possessions for years, often framed and on prominent display in their offices.  So it serves as a constant source of visibility and awareness, which always helps the next time I call.   www.CartoonLink.com

2.  The Cheese Technique.  I credit this method to sales trainer and author of Cold Calling for Cowards, Jerry Hocutt.  Unlike most of us, Hocutt has written a book, and that gives him a terrific advantage when reaching out to CEOs.  And that advantage is called the “Cheese Technique.”  Hocutt sends a copy of his book with a Post-It note attached to a particular page, with the note, “Here’s an easy and fun technique that works.  I’ll call next week and see what you think.”  Although he uses his own book, his advice is to use a copy of Spencer Johnson’s Who Moved My Cheese? (hence the name of the technique) if you don’t happen to have a book you’ve authored yourself.  Hocutt claims he always gets through using his method for five reasons:  the ideas in the book work, people always open packages, people like to receive and save gifts, the book gets passed around and discussed, and most importantly, it plants a sense of obligation to reciprocate.  Which often tranlsates into at least a phone conversation with the CEO.

3.  Tell Your Story through the CEO’s Executive Assistant.  The CEO’s executive assistant plays an enormously important role in the company.  They are very smart, brutally honest when they need to be, and quite clearly, on some levels you could say they run the company.  Okay, that’s a bit of an exaggeration, but they certainly do run the CEO’s office.  And while they won’t stand for nonsense, they are always open to helping you reach the CEO if they feel you have something important to say.   So I occasionally ask if I can write a quick e-mail to explain why I’m calling and why it’s important that I speak with the head honcho.  The e-mail must be concise and compelling, but I have to say this technique has often brought surprisingly positive results.  And it doesn’t cost a thing, other than a bit of your time.

4.  Have Your People Call Their People.  If you happen to have your own executive assistant, have them call the CEO’s assistant to set up a meeting.  In fact, if you don’t have an assistant, hire someone to serve as your assistant to make the call.  Not surprisingly, this method works because it is the way most CEOs arrange meetings with each other, assistant-to-assistant.

5.  Run an Ad in The Wall Street Journal.  This is a technique perfected by Rick Bennett, and even though it is the most costly of the seven listed here, the results can be positively explosive.  Bennett has run many of what he calls “guerrilla warfare” ads, one-time ads in top-line newspapers, targeted to a specific person or company with the goal of prompting them to a specific action.  And that includes prompting CEOs of Fortune 500 companies to call, invest or even acquire his client’s businesses.  This is a man who rubs shoulders with the likes of Oracle founder Larry Ellison and Motorola CEO Ed Zander, so he knows what it takes to reach a CEO’s inner circle and influence their businesses.  If this approach appeals to you, I urge you to visit his site and take a look through his portfolio.  www.RickBennett.com

6.  Try Calling Before or After Hours.  If a CEO is truly doing their job, it requires supreme dedication and long hours, which means they’re often the first to enter the building and the last to leave.  That’s the theory, any way.  And, being the President of my own company, I can confirm that many sales reps do get through when they call before my staff arrives.  It’s certainly worth a try and it won’t cost you $10,000 to test.

7.  Write A Few Blog Entries that Include the CEO’s Name.  This one comes from Ogilvy 360 Digital Influence’s Senior Vice President, Rohit Bhargava.  He claims to have found a way to “virtually guarantee a message reaching it target, no matter how cluttered their inbox.”   His secret?  Post a message to the CEO on a blog and whatever you do, make sure you spell the CEO’s name correctly in the entry.  It may sound silly, but Bhargava’s logic is actually pretty sound.  Many people in the public eye set up Google alerts on their names, so any time it appears anywhere on the Web, Google sends an alert.  And they pay attention.  The trick then, is to craft a message that not only reaches them, but entices the CEO to pick up the phone when you call.

Clearly, just reaching a CEO is not the end goal.  You need to be prepared with a solid understanding of their business and competitive conditions -- and a clear idea of what you can do to help them succeed.  Otherwise, you’re just wasting their time.

Just as importantly, you need to be clear about your need to reach CEOs.  Contact campaigns won’t make sense on a conventional cost-per-lead basis, at least not without putting it in perspective.  If you feel it’s ridiculously extravagant to spend a few hundred dollars on a giant foam core postcard or $10,000 on a single newspaper ad to break through to a particular CEO, you should be questioning your need to reach the top.  On the other hand, if you recognize the genius of spending $10,000 to get a $10 million deal and a 100,000% ROI, you need to add contact campaigning to your marketing mix now.

So, how did it work out for my friend and her job interview?  She sent one of my giant personalized cartoon postcards to her interviewer and was hired on the spot.  And she is now one of company’s top C-level cold callers.  Like I said, it’s a lot more fun when you have the power to reach virtually anyone.

Stu Heinecke
Host of Contact Marketing Radio
Founder & President of "Contact" and CartoonLink, Inc.
Wall Street Journal cartoonist
Author of How to Get a Meeting with Anyone
Tags (9)
0 Votes
Reply