TSU - The Social Media Network that Pays YOU Their Advertising Dollars

TSU - The Social Media Network that Pays YOU Their Advertising Dollars

What if I told you there was a social media network out there that actually paid YOU 90% of their advertising dollars?

In the current state of social media, especially if you use Facebook, you might be surprised to read a headline like the one above. Let's face it, if you want to reach folks on Facebook (even if they are your own fans) you're gonna have to pay for it... but TSU is a new social media network that is turning the social media model on its head... The network believes such revolutionary ideals as:

Curious? - So was I when I heard about it.  So I went ahead and joined.  You can check out my profile here: http://www.tsu.co/NickCavarra (Oh, and you can use the join button as my invitation to come on board). 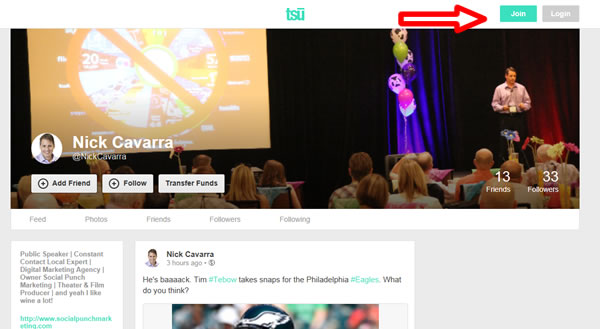 I have found the integration with Facebook and Twitter to be great.  Pictures shared from TSU on Facebook show up well and tweets post immediately.  So now, I just share from TSU on Facebook and Twitter and know my audience will see it no matter which channel they are on - and I can get the benefit of engagment on TSU.  I have a Galaxy phone, so the Google app works great and my wife has an iPhone and that app works as well.  They don't have other networks integrated in yet, but I am sure they will soon.  Worth it to just get on board now as the expand into more networks.  They're already up to 4.5 million users!

I doubt I will ever make a ton of money on TSU, but I'd rather make something rather than pay for a social media sharing tool.  And TSU has excellent programs for nonprofits and businesses as well.  Pretty much a win / win for everyone.

Here's a few videos and national press articles as well to see what they say about TSU:

FastCompany - What If You Got Paid For Everything You Post On Social Networks? That's the concept driving Tsu, where artists are testing the waters on a social network that shares ad revenue with users. Click Here.

Re: TSU - The Social Media Network that Pays YOU Their Advertising Dollars

How to fix unexpected error on tsu.

It shows a message

Unexpected error, we are on it....