Why You Shouldn't Ask For Yelp Reviews

Why You Shouldn't Ask For Yelp Reviews

I frequently have conversations with small business owners about Yelp. These chats are sometimes joyful, but more often they are filled with some confusion, frustration and hope. It all comes down to reviews: how many are there, how high’s the star count, and are they filtered or not.

For established consumer-facing businesses with lots of positive reviews, Yelp is just about their best friend. This is because Yelp can drive massive traffic. Yelp is now the 29th most visited site in the US according to Alexa.com

If a business doesn’t have enough reviews though – like mine with one, Yelp’s doing just about nothing. I’m not too worried about it because my business is more of a B2B and even Yelp admits they’re not nearly as strong at helping B2B’s drive serious leads.

What if you’re a B2C and you want more reviews from your satisfied customers who regularly tell you to your face how much they like your business? Shouldn’t you ask them to write a review for you on Yelp? Maybe you could make it easy by having a laptop connected to Yelp right in your lobby?

This is hard for me to recommend you pull back from asking for Yelp reviews because it seems like such a natural idea. In fact, I’ve done it! But not just for Yelp. I’ve asked for LinkedIn Recommendations and Google reviews, too. I think the only thing I haven’t asked for is a Facebook recommendation. Does anyone really look at those? I digress.

So, why shouldn’t you ask for Yelp reviews? The #1 reason is because the overwhelming majority of people using the internet aren’t Yelpers, that is, the people writing Yelp reviews. According to Yelp’s blog only 1% of the Yelp community actually write reviews. Another 9% will engage with them. The rest, some 90%, will read them.

If this is true, and it’s probably pretty darn close since much of the social community works this way, what are the chances the customer you ask is going to be a Yelper? Slim at best.

But what if your customer likes you so much that they want to do this for you as a favor to help your business? You encourage them to set up an account and write their first Yelp review for you. Guess what happens next? Their review is filtered because Yelp finds something fishy about the review or reviewer. That is the review just might gush too much or have too little detail about their engagement with your business or because they’re brand new to Yelp with no friends or prior reviews Yelp just decides that they were put up to the review by the business owner. 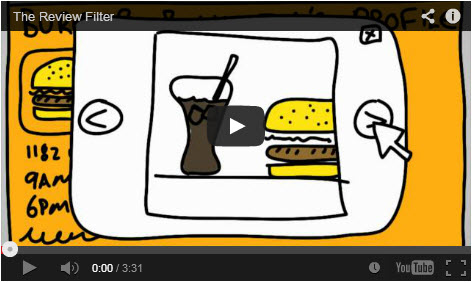 Whoops, Yelp’s right! This is why they have the filter. If you’re not sure about what the filter is you can watch the short video referenced above about it.

You see, Yelp figured out a long time ago that small business owners wouldn’t be able to resist putting their customers up to reviewing them. Thus, they created the filter. Incidentally, they also want to prevent disgruntled employees or competitors from having an artificial means of damaging a business by writing malicious reviews filled with lies. The filter works to block those reviews, too.

The more I think about the more I realize that the filter’s a pretty smart idea. You could say it keeps us honest. If we know the odds of us getting a 5-star review just by asking are slim, it leaves us to just focus on doing the best we can to create so many happy customers that eventually we’ll please a Yelper.

Just last week I was speaking to a speech therapist who had ¾ of her reviews filtered. What a shame I said. Her response was that she thinks that some of those reviews were written for her as something like a going away present when she chose to leave Southern California for the Bay Area. Interesting.

By the way don’t believe even for a second that you can get Yelp to unfilter your reviews by paying them to advertise on the network. Yelp is so scrutinized for improper behavior after being in court more than a few times that they just aren’t going to do anything like that. Maybe there was a time, but those days are over. Yelp is clear to point out that plenty of advertising businesses have filtered reviews while those who don’t advertise have plenty of exposed reviews and are getting monthly leads. It’s true.

What Can You Do?

To get more Yelp reviews I fully recommend you do two things: 1. Have an outrageously great business; and 2. Set up your Yelp page and let customers know you have one. Put the Yelp logo on your website, in your newsletter, in your ads and so forth. By pointing people to your page you’ll naturally get reviews over time since you’re providing outstanding service paired with great products.

This is exactly how Yelp wants you to do it. Play by their rules and you’re more likely to win. Have questions about Yelp? Please post them below in the Comments.

Thank you for this.  I just set a a Yelp business account and wass going to ask my email contacts to review me.  I guess it would be weird if i got 50 great reviews all in one week for a small business.  Great tip!

I am a non profit organization and have been a customer with Constant Contact for about 10 years.  Today, as I went to suspend my account, I was informed that it is practice to bill customers five days early without their permission.  Today I am not a happy customer and am considering being an ex customer.  Not good business practice.  Never in the favor of the customer is it?  And then they would like to offer a constant contact account credit instead of a credit back to my credit card.  Hmm .......

I am sorry to hear of your experience.  I will pass along your feedback to our teams here about our policies. If there is anything else we can do, please feel free to reach out to us.