Hello, It's difficult for me to go through my stored images as you can no longer search by name. Yes, you can sort by name or by oldest/newest, but I what if want to find something that starts with an "L," for example, and I have over 1,000 images uploaded. It's very difficult and time consuming. I liked the Legacy editor better because I could search by name. Thank you.

Thank you for reaching out to us about the ability to search for your images by name. I am sorry that the lack of this feature makes it difficult to find your images. I will be tracking your feedback about our new editor for you.
If you click on a placeholder image in your email template and click replace you should have the option to search by image name on this screen. I hope this helps with your process in the meantime!

LizH15
Regular Participant
It would be great if we could search for images by name when we are adding them to our emails.

Will the new editor eventually offer these features from the old editor? Their absence is slowing down the process of creating our weekly email campaign:

1. Search function within the "images." Being able to search by name within the images (during editing) makes for a much faster process when adding a photo. This was available on the old editor but not on the new editor.

2. Text boxes no longer move efficiently within the same column or from column to column like they did with the old editor (we have a two column email campaign). I constantly move text boxes and images around as new items are added to the campaign throughout the week. The new editor does not allow this to happen quickly, and sometimes not at all. It's slow, and the "hot pink" bar that appears does not always indicate where the box falls -- it jumps around a lot and freezes up frequently. Customer support advised that I should create a new text box each time and then cut/paste the content, but that is extremely time consuming, especially when one box can move several times throughout the week as edits are happening.

3. The old editor allowed logos to be placed within the section "headers." I was advised by Customer Service that headers are now called "buttons" on the new editor, and do not allow logos to be placed inside. With our weekly campaign, this creates duplicate information. The header tells the reader that a new topic is about to begin, then we must also incorporate a graphic within the text. Many times, it's the same as the header.

I agree! I have so many images, there is no way I can scroll through them to find what I need. PLEASE add a search field!! 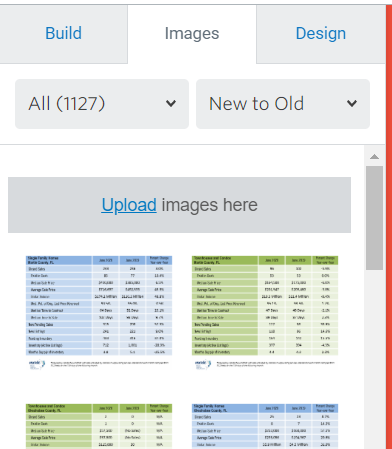 When will there be a search function for images? I'd rather use those already in the system rather upload the same image several times.

Hi @BLAKER1 what type of search system for your images are you looking for? Where in your account are you not seeing the option to search your images?

I'd like to see a search for images too. I thought there used to be one, on the create or edit page. Under the Image tab it has All or A-Z, Z-A, but I have hundreds of images and don't always know the first word of the one I want to use. Seach would be very helpful.

Agreed! A search on image names would be most useful. Also, a way to delete images that I have and will never again use.