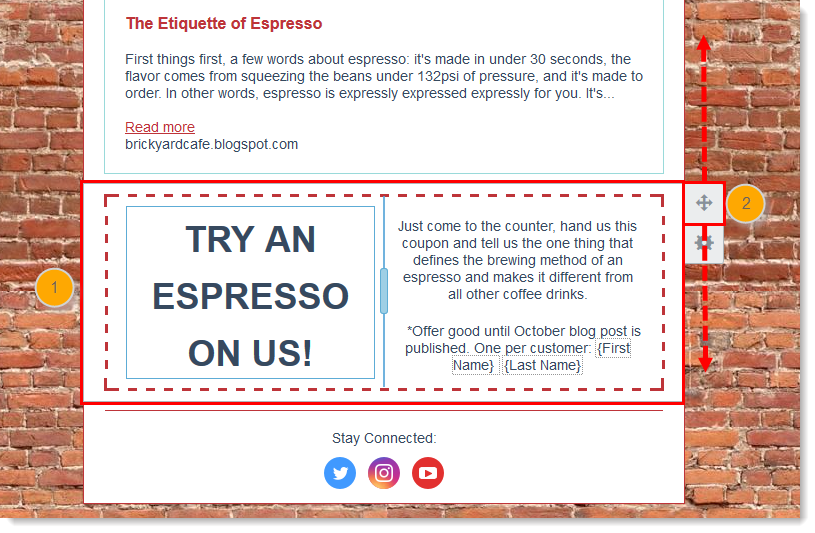 Chiming in to add support to this thread! I'm a new Constant Contact user, working on a monthly newsletter, and so far it is extremely tedious and time-consuming to have to move one block at a time. This seems like a fairly basic feature and I hope we'll see it implemented soon.

Is this a feature that will be added soon @constantcontact?

Hi @ErikaV592. There are many factors that are used to decide what is added to or updated in our product which can cause us to sometimes not have a timeline for when a feature will be available. We do not have any updates to share regarding this feature request. If we do, we will post them here.

As good as Constant Contact is, it is sorely lacking in usability.

The lack of grouping multiple blocks to move them en masse is frustrating. Stating "Its easy to move a block" is short sidedness and a slap in the face to many that would love this feature. Also, the ability to edit the "Thank you" note (I know another discussion) would be helpful. Sure, it can be done by creating a landing page, but many don't want a seperate landing page one has to go to, rather than just have the ability inline in our own pages.

I agree. At my  company, we are constantly reprioritizing stories and I have have to select and drag multiple boxes around--sometimes 2 or 3 stories, each with a divider, image, headline, text and button. It would be great if we could "Link" or "Group" the elements in each story box, like I can do in Powerpoint, Canva, Photoshop...

I love Constant Contact, and this is the only feature that really frustrates me.

Grouping blocks together would be a tremendous feature. We also sometimes use the same content but shift its location and moving each block one by one is, as another user stated, tedious.

Looking for this feature as well. This would save me A LOT of time and frustration in my email building process.

Still no solution from Constant Contact for what seems like an obviously useful layout design tool…  Constant Disappointment!

This is function we would REALLY like to see added. Please let us know when this is added.