I am setting up an event for a series of three dinners. I would like registrants to receive an automatic discount if they purchase multiple tickets - either multiple seats for a single dinner, or a single seat for multiple dinners, for example. Is this possible? If so, how is it configured? Thank you for any guidance!

Thank you for reaching out to the Community, we’d be happy to help point you in the right direction! Are tickets for all three dinners going to be sold under the same event? Or will there be separate event campaigns? Having this clarification is helpful as our Event Campaigns do offer the option for discount codes. The discount codes can be offered for a dollar amount or a percent off of either the entire order or selected fees. If you have your dinners set as separate campaigns, the discount code can be activated under each campaign. You can then send this code through the confirmation email of your first available dinner. The option to edit this registration notification is located under the Registration tab of your event. 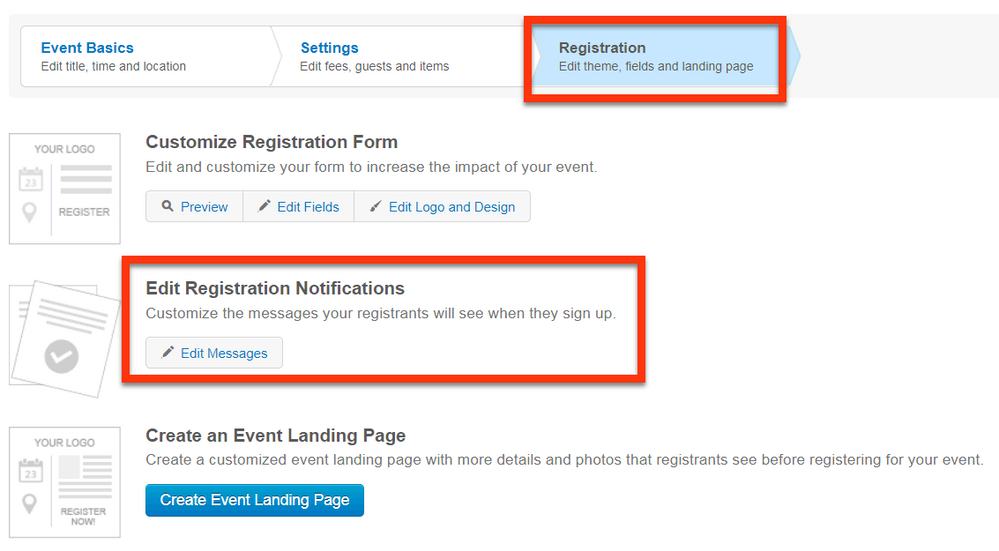 You're not alone on your email marketing journey. Connect with a Marketing Advisor to see how they can help you develop the right strategy for your business and get the most out of your Constant Contact experience.
0 Votes
Reply
Highlighted

Thanks for the suggestion Frankie_P. That's a good one and I'll consider it for future use. However, we wanted to make it easy for people to purchase the whole series at once, not make three different transactions, so we went with one event for the series and multiple "Items" as the three dinners, and no base event "Fee". The discount code was offered and we just used language to imply that it was valid for multiple tickets only. If someone tries it for a single it will still work, but we don't think it will get abused - it is a fundraiser after all, most people aren't even using it for multiple tickets.

One issue I have found with that feature, however, is that where the promo code is located on the form does not flow well with the way the registration process is laid out. It asks for the promo code before you get to the part where we introduce it, or you choose your items. It would be nice to be able to move it down the page to where you select items, or below that.

The other problem I'm facing now is that if someone purchases one dinner, and then wants to buy the others, they cannot do so unless they use a different email address. This is very limiting. I was hoping there would be a button in event settings to "allow multiple registrations per email address". The forum post I found on this is from 2014 so I hoped there might be an update. Cancelling and reregistering won't work because they've already paid for one, so the total wouldn't be right, and ideally we wouldn't get into refunding and making people start over every time they want to add more tickets - it has to be convenient.

Do you have any advice to offer on that?

Thank you for sharing the workaround that worked for your event! You are correct, the section for your promo code will appear above the items for sale section. You can always add in a line about the option for a promo code on your Event Landing Page or even in the event description. Adding it into the event description will allow it to display at the top of your registration page. As for your registrants, I apologize cancelling and re-registering them is the workaround we are still suggesting. At this point we are only fixing critical bugs for our current Event Campaigns. However I have tracked your feedback on our both of these items in the case that this were to change.