Sometimes when posting a new newsletter via email, I can't remember if I've already posted an article or picture. To go back and look at my previous emails means going to campaigns, selecting a previous email, and then seeing that preview. I'd much rather have one place I can go to scroll quickly through all of my email creative, one after another. Thanks for considering. Will

WPinOhio
Regular Participant
I like the new layout of the library because I can now see the images vs. the image name. However, I miss the feature that easily let me see which images I have used in send emails. I found the eye really helpful when I want to de-clutter the images I have in the library.
3 Votes

Hannah_M
Moderator
Status changed to: New
Thanks for this feedback! So we can better under the process, do you often delete images from your library that you aren't using? Does more space help you keep them or do you like just having a few images there?

MatthewW039
Participant
Well in e mails, when you create folders, you also have the unfiled folder for all of the emails that have not yet been placed in a folder. I think that is great and helps with organization. I think it would be great to apply that same concept in the library for images, I know there used to be one but with update I don't see it. Also I know they used to state whether an image was being currently used by a newsletter, I also felt that was great when it came down to organizing and deleting images that were not being used or were just old. If they had a column in the library simply stating whether the image is being used and also the name or date of the latest newsletter it was used in would be very helpful for organization purposes. The new layout is great, I just think adding one more column for image usage and an unfiled folder would make it a bit better and more user friendly!

zlinder
Consulting & Training
I am trying to determine in my list of images in my library, which are currently being used in an email vs those that are not. I am trying to delete ones that I no longer need and I now don't see the little "eye" icon that showed that an image was in a e-letter/eblast.

Hello,
Thank you for your feedback. While we do not have the way to view that view of all images once at the moment, there is a way to see it per image by clicking on the name of the image and viewing the details. Hopefully this may help. 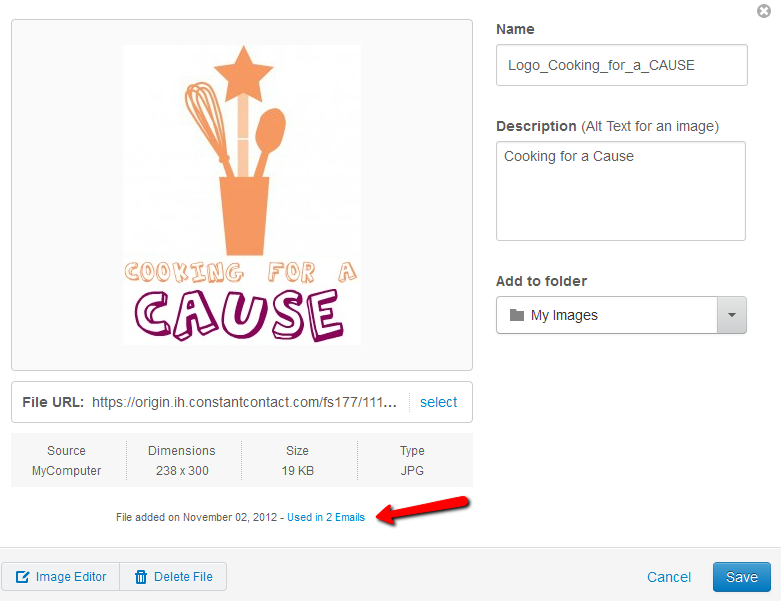 Thanks for posting this idea, Will! I can understand how seeing what you had sent previously would be helpful for you!

CoryH
Regular Participant
I miss a feature you had before ... maybe a while ago. I upload pics, send them to bossman... who wants a "small " change. so I make the change, reload new pic ... and so on... well i will have 5-6 pics in library that didnt get used in the final email that got sent. I want that feature that shows which images in the library got used in an active email, and which images that are not in an active email. so I can delete them and clean up/ manage my folders. thanks
1 Vote

ChrisH66
Participant
Please put an indicator next to every library item that is connected to an email marketing piece. This would help in knowing what images are currently in use.