I received my weekly contact subscribe/unsubscribe report and noticed a contact who had "unsubscribed" which was very unusual. This person always requests our emails and has a 100% open rate. Yet, the report I received said they were unsubscribed "by the contact" on April 15th. I reviewed their list of emails that we had sent them and could not find which email they supposedly unsubscribed from. I also reviewed my list of campaigns for the last month and looked at each report that had an unsubscribe and this contact was not mentioned on any of those reports either.

So, I opened up a chat with your support. First they didn't understand what I was asking, they started by confirming the person was unsubscribed - yes I know that! Long story short, they finally had someone look on the 'backend' and what they told me was that the contact was unsubscribed by a third party app (SyncApps) which we use to add contacts.  I know this is completely untrue, because when SyncApps unsubscribes someone, their record in Constant Contact says it was done by "API".  So your support person had no idea why our contact had unsubscribed and because they themselves couldnt figure out which campaign the action was taken on, they just assumed it was Sync Apps and told me that's what it was. I assure you I have checked our sync apps account and this email was NOT unsubscribed from SyncApps.

So, I still don't know why this person was unsubscribed and now they have to go through the hassle of re-adding themselves since I am unable to add someone back who has previously unsubscribed.

I also suspect this "unsubscribe" action was taken on a very old email (since i can't see any removals for the 'last 200 campaigns' on the record) which our contact had forwarded and the person they forwarded it to clicked unsubscribe.

For this reason, I would like to reiterate an old request that I had submitted years ago which has not been fulfilled, which is to PLEASE REQUIRE PEOPLE TO CONFIRM THEIR EMAIL ADDRESS WHEN THEY CLICK "UNSUBSCRIBE"!!!!!!!!!!! Other email providers do this, why can't Constant Contact????? It would save us from accidental unsubscriptions initiated by people who aren't even on our lists!!!

Thanks for sharing this feedback with us. We apologize for the experience you had with the contact on your account. You are correct, the contact in question was unsubscribed by the 3rd party integration on your account. Because of this I would recommend contacting their support to see what may have caused this update to happen. With that said, we do want to point out when unsubscribing through the unsubscribe button in the footer of a Constant Contact email readers are asked to confirm their email address. 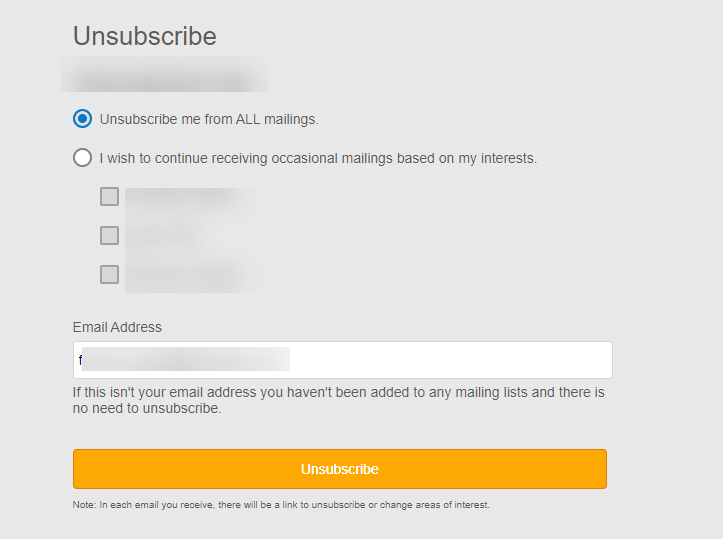 Thank you but that is 100% incorrect. They were not unsubscribed via our 3rd party app.  I know this to be a fact because the app pulls from our membership database, and the “unsubscribe” button was not checked at all. So, again, your support team is just assuming that’s what happened.

It's interesting that you have provided that screenshot because this is the first I've seen where the unsubscriber is asked to confirm their email. That is actually a feature I have been requesting for years, so thank you for finally adding that.   However I am 100% sure this was likely an unsubscribe click on an old email being that there was nothing in the contact's "previous 200 emails" listed on his account that indicated an unsubscribe. Also, this person has a 100% open rate which is what led me to believe it surely was not him.

William_A
Moderator
In response to Marisa_M

Thank you for providing the additional information. We've pinged our T2 team to take another look, to see if there's some backend information they can scrounge up regarding the 3rd party app's communication with our system, or to see if they can find anything else beyond the initial time they looked.

With that said, if the contact forwards an email, and the recipient chooses to unsubscribe and confirm they're unsubbing the contact's address rather than their own, there's really not much we can do in this regard due to Compliance and permissions standards. Another thing to keep in mind is that some email programs' algorithms will try to unsubscribe based on a myriad of frankly normal factors (such as mass-deleting emails from a single source, updating security protocols, etc.), and we'll be forced to accept that due to anti-spam laws and other Compliance standards. These types of unsubscribes would still show in the UI as "unsubscribed by contact." We apologize for the inconvenience in this regard, but since the contact is full resubbed to you, they should be good to go on receiving your emails again.